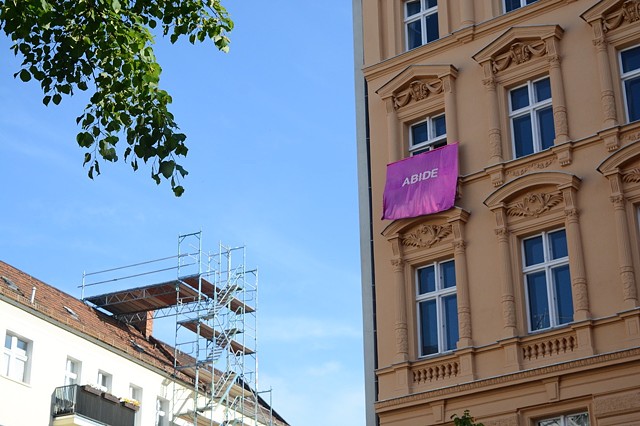 Humans crave communication. Before twitter, before instant messaging, before email, cell phones and landlines in every home, but after telegrams and carrier pigeons, there was the telex machine. Invented in Germany in 1926, it could initially send up to 66 words a minute. Under lockdown this spring, and feeling the need to correspond with the outside world, artist April Gertler renewed the spirit of the telex with an eponymously titled project. On a magenta banner hung from her fourth-floor apartment window in Berlin, she pinned a new word for each of 66 days. Alternating between German and English, between news stories, social media and personal sentiment, she chose from the dictionary with care. By the end, on fabric that had faded to pale pink, her communiqués included such pertinent gems as BUOYANCE, WANDERLUST, MOODSWING, TEDIOUS, and PERSEVERE, not to mention the suddenly heart-rending BREATHE. One hopes that Gertler received some words in return, perhaps a note slipped under the door from appreciative passersby or piqued neighbors. But even if not, her words no doubt became a part of larger conversations already ongoing.