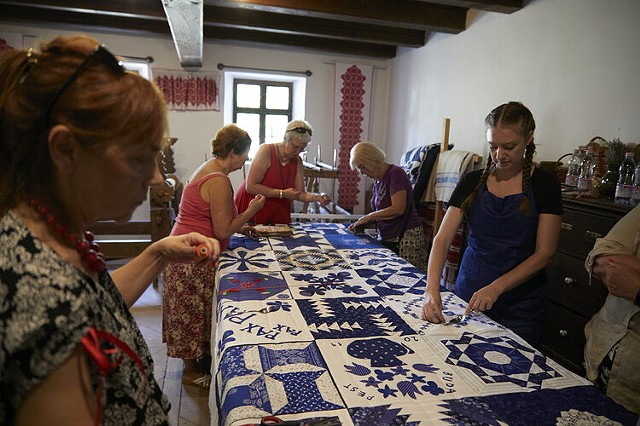 Last year, Christalena Hughmanick toured Hungary as part of her project, “Freedom Quilt Hungary.” She gave lectures on American quilting traditions and their relation to cultural identity, creative expression, and storytelling, combined with workshops in sewing and appliqué techniques. Along the way experienced members of the Hungarian Patchwork Guild contributed elaborate blocks of traditional indigo-dyed kékfestö cloth to a large communal artwork sewn together in a public quilting bee at a museum in Szentendre, a town north of Budapest. Two-thousand-nineteen was also the 30th anniversary of the end of socialist rule in the country, the 30th anniversary of the establishment of the guild, and the electoral setback of populist dictator Viktor Orbán. In the end it’s all connected—freedom of expression, freedom to congregate, political freedom, aesthetic and human diversity—just as the 108 unique blocks in Hughmanick’s “Freedom Quilt” have been stitched together with care to make a single enormous, strong and utterly vibrant textile. Would that our basest politicians—American, Hungarian and otherwise—would stop trying to unpick it, and our populaces could work together to halt them.