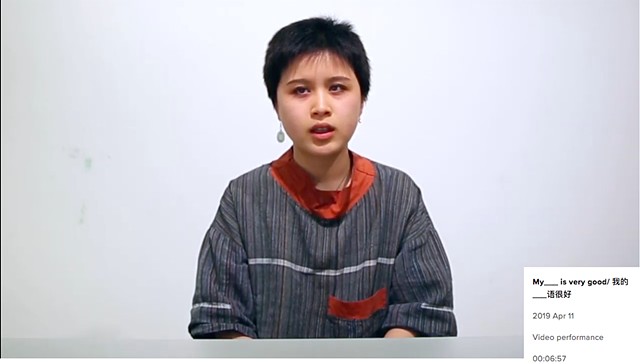 Translation is a strange thing, whether one plays it for laughs or not. The Beijing/New York-based artist Tin Wai Wong handles it deadpan in such performances as “what to say, how to say, where to begin,” in which a speaker attached to her stomach broadcasts the internal sounds of digestion, providing an alternative to trendy food-speak. The caption for “Salty water” lists only washing machine and salt, but the tightly framed video of an open washer reveals a brown paper package (presumably containing the aforementioned salt), which by the end of the 14-minute cycle has been rendered into a nasty pulp rather than some mythic ocean brine. Wong also tackles words themselves. After apprenticing in a Chinatown print shop, she acquired the skills necessary to translate the 108 dishes of the famous Manchu-Han Imperial Feast into American Chinese takeout menu lingo. In an unexpectedly touching video performance, she gravely repeats the recorded phrase “My –– is very good” dozens of times in as many tongues. After nearly 7 minutes of this, language becomes nothing but a wave of sheer sounds, wearing down the ever-solemn Wong with its endless babel.