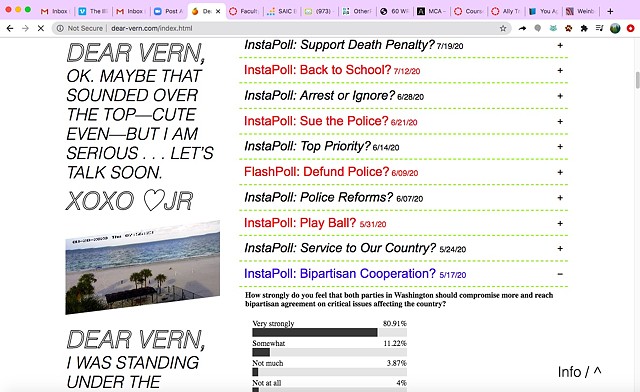 Uncle Sam said it first: I want you. Gross or not, there’s an erotics to American politics, to its pretence of one-on-one communication, of direct eye contact, of representation, of solicitation. Artist Janelle Rebel plays hard and fast with this state of affairs in her Dear Vern web archive, where since March 2018 she’s been collecting the InstaPolls sent out weekly by her congressman, Vern Buchanan, a Republican from Florida’s 16th district. She also occasionally writes him love letters of a vanguard sort, which tip the scales of weird obsession toward a public figure in remarkably uncomfortable ways. (But hey, they’re really asking for it.) Because Buchanan’s polls remain active, anyone can still weigh in on the death penalty, defunding the police, socialism, Trump’s impeachment, colonizing the moon, and other issues of yesterday and today. The results appear immediately, addictively and terrifyingly. Give me parliamentary-style democracy any day.