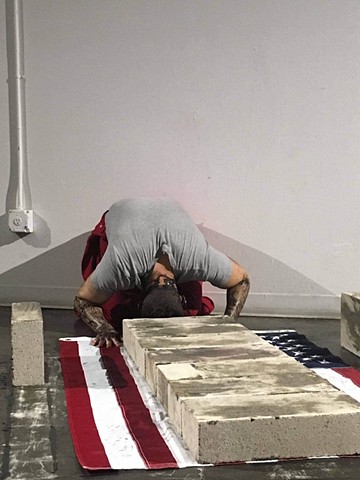 Sami Ismat creates performances that challenge Americans to acknowledge how their country quashes the freedom and safety of those who come here for refuge. Ismat ought to know: a Syrian asylum seeker, his citizenship status is in limbo and he lost his father to COVID-19 in the spring. His soul-crushing performance from 2019, “Every Time I Step Toward Freedom,” eloquently embodies the former while eerily foreshadowing the latter. Dressed in a jumpsuit that recalls both prison and construction garb, Ismat builds a homely wall of concrete blocks and mud around a tenderly unfolded U.S. flag, upon which he enacts the Muslim daily prayer ritual. As he repeats the Salat, he begins to place bricks atop the flag, turning them into a wall that eventually displaces, bars and removes him from the site. He leaves, utterly spent, totally silenced. I have never understood the prohibition against using the American flag for anything other than the most patriotic of flag waving; any use of it that is sincere, loving and thoughtful ought to be celebrated. Ismat’s performance does just that, and it would have done it again, at a time when it is utterly needed, in Here to Stay: Braving Barriers Through Performance, an exhibition devoted to social justice artworks, scheduled to open this fall at Union Gallery. When the University of Wisconsin, Milwaukee, cancelled the show, pretending that the reasons were pandemic-related, the school exposed itself as part of the very problem that Ismat’s performance addresses. Good that after much protest, the gallery recanted. Better will be for them to address the systemic racism that makes space for censorship of anyone and anything that does not fit white supremacist notions of American.