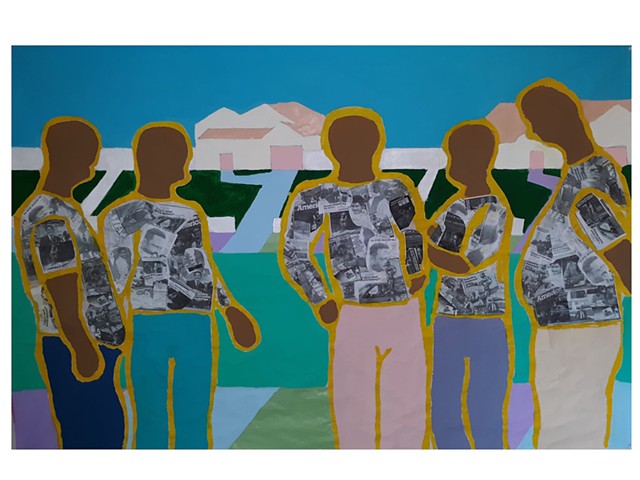 How we are seen, how we see one another, and even how we see our own selves is deeply impacted by mass media. Subordinate groups know this all too well—women, Latinos, Muslims, and everyone else who isn’t white, male and heterosexual. African Americans arguably know it best (or worst) of all. It’s a subject neatly explored in a series of collages created during quarantine by JEFF, a South Carolinian artist and community activist. The scenes are simple enough, featuring a mother and child, people lounging in a garden, a horse and rider, a group of folks talking on a residential street. Blockily outlined and faceless, and sporting uniform clothing, the figures are hard to understand as distinct human beings. How we distinguish them depends almost entirely on the cues JEFF does provide, namely the family photos and pages cut from publications like EBONY or JET, bits of which he uses to fashion clothing and body parts. Luckily these folks have identities formed by such positive imagery. Implicit is all of the negative media that’s also out there, wreaking all of its serious damage on individuals and groups alike.