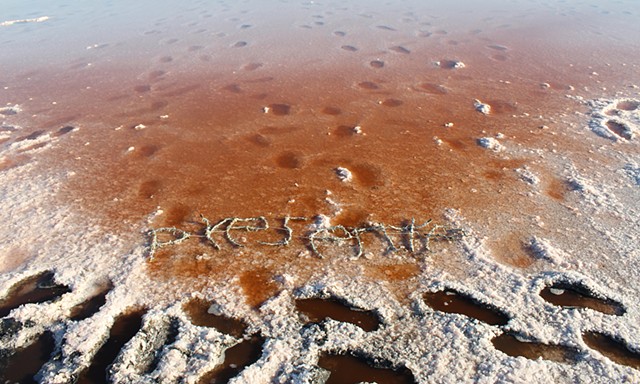 What does land know of the lives lived and lost on its mountain ridges, its parched deserts, its rocky shores? What can buildings tell us of the goings-on behind their closed doors or of the views seen from their windows? They are aware of everything, I believe, but most of us don’t seem to speak their language. Beatriz Guzman Velasquez does, she is in conversation with her surroundings in the Rio Grande Valley, near the Mexican/Texan border. It is not an easy discussion to hear, but in artworks made during the quarantine, she lets others listen in. On the windows of her home, in an inversion of her mother’s practice of taping newsprint to the windows as a sunshade, she affixes the daily paper cut with letters that spell out “hoy hay más muertos que vivos.” Translation: today there are more dead than alive—it is a story of now, of deaths from COVID and related factors like domestic abuse, and also of the past. At the Sal del Rey, a local salt lake, an alphabet of mesquite branches and fresh sage form “presente.” Who is present? Only those whose existence has been threatened need to make such declarations. The blood-red waters beneath her words concur.