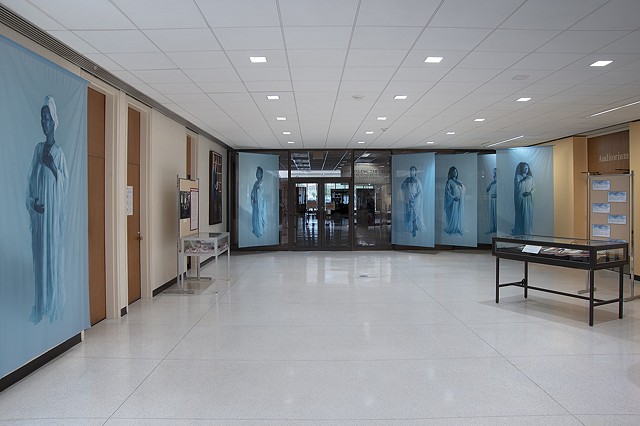 To mark the hundredth anniversary of the passage of the 19th Amendment, Ginny Sykes created 100 banners featuring larger-than-life-size photographs of women. Her subjects appear at once deeply individual—diverse in age, size, shape, color, heritage—and profoundly united. Uniformly draped in long pale mesh gowns, posed in three-quarter view, with hands on heart and stomach, they stand as stately as do all those statues of famous white men found the country over. Titled “100 Woven: Collaborations Beyond the Veil,” the banner women act as a rejoinder to the surfeit of male memorials and the dearth of female ones. (Chicago has only two public monuments to women, more if you count fictional figures, which let’s not.) And they do it in their own way, being made of a lightweight sheer fabric not forever bronze or stone, being a collective of regular individuals rather than a smattering of idealized heroes. They’re flexible and mobile, too: though an installation and performance in Naples had to be cancelled due to the pandemic, Sykes was nevertheless able to install six banners, all featuring African-American women, in the Woodson Regional Library on the South Side of Chicago, and has plans afoot for more.