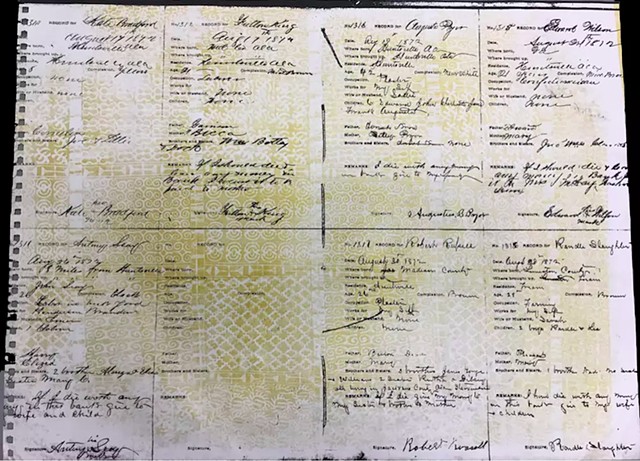 Was wallpaper the first immersive art form? An installation by Shonna Pryor, planned for Black History Month but postponed indefinitely due to the pandemic, will test out its current potential by covering Chicago’s petite Material Gallery from top to bottom. Unlike with traditional wallpaper, however, the effect will be palimpsestic rather than decorative. Pryor’s repeating design features faded ocher patterns taken from indigenous African clothing and ceramics, overlaid with bank legers from the Freedman’s Savings and Trust Company; to this layering add viewers, who will themselves become foreground to the artist’s silkscreened backgrounds. The Freedman’s bank, founded in 1865 to provide African Americans with a place to put their money in a segregated financial system, failed catastrophically in 1874, leaving devastated communities and institutional distrust in its wake. Today the bank’s archive exists as a repository of information about entrepreneurial African American families during Reconstruction, including, perhaps, the artist’s own. One of the seven reproduced ledgers is for an Augusta Pryor of Huntsville, Alabama, who had six children and a wife named Sallie — and maybe a great-great-great-niece named Shonna.