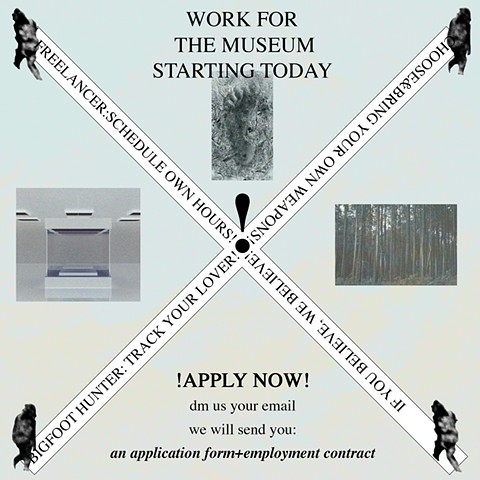 Institutional critique is overdue for an overhaul. Enter Olivier, “Unpaid Intern” (and founder) of The Museum, an artwork-as-institution that exists somewhere in between an email address, a number for text messaging, various standardized forms, a series of short and weird videos, the possibility of dream telepathy, and an Instagram page. Since October, The Museum has been on the search for evidence of Bigfoot, to which end it has hired multiple freelance Bigfoot hunters, who are encouraged to submit “Evidence” of their findings and whose primary qualification is that they must have faith in the idea of Bigfoot. The Museum, as Olivier formulates it in Statement 7 of “Employment Agreement,” is based in a system of belief that is shared between itself and its employees, and which The Museum retains the right to redefine. If the very idea of Bigfoot seems preposterous, we might do well to remember that much contemporary art seems equally outlandish to non-believers. And that a whole lot of unpaid interns are busy slaving away in galleries and museums, hoping it will one day lead to a proper job. Bring on the hunt!