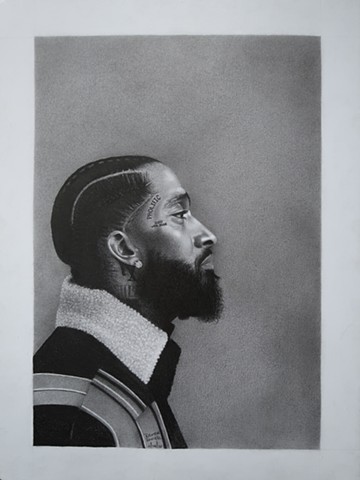 Is there a more intimate medium for portraiture than pencil on paper? I believe this to be true for sketches and caricatures, but especially for photorealistic drawings, where every pore of skin, every strand of hair, evidences the careful observation and intentional mark-making of the artist. Consider the work of Devon Daniels, who first discovered drawing while incarcerated and continues to practice it after 25 years on the inside. His likenesses of Kerry James Marshall, Dr. Margaret Burroughs, Nipsey Hussle and Malcolm X reveal respect and affinity on the part of the artist, as expressed through the significant time, patience and care needed to execute such meticulous images. To make a picture in this style is to express admiration or devotion through graphite, much as Charles White did for his African-American subjects, much as Vija Celmins does for the night sky. Daniels, not unlike Celmins, must represent his beloved subjects from a distance—him from behind bars, her able to see but never touch the sky—but in the act of representation, that distance is hopefully, at least partially, breached.