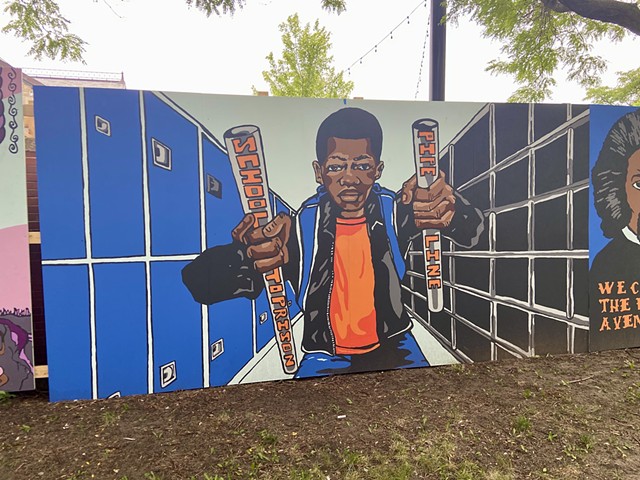 There’s no mistaking the causes of Juan Luna’s artwork: bring back parole in Illinois, extend the vote to the formerly incarcerated, get vaccinated, end solitary confinement, stop ICE deportations, know your rights. His drawings and prints are bold, their statements made in strong words and clear imagery. Their sincerity is palpable. Many feature a human touch—a hand holding the can spraying “Parole Illinois,” an aproned woman hammering down the border wall, an immigrant standing before an official—because it is humans whose lives are at stake. Even Luna’s “Get Vaxxed” campaign implies it, with a heart-thorny rose-ribbon combination that, if it weren’t pencil on paper, would be tattooed on a bicep. These are messages that need saying and need saying loud. Thankfully some are. Luna’s co-designed picture of an African-American student literally breaking the school-to-prison pipeline in his young hands was painted by community members as an outdoor mural at the DuSable Museum in 2021. Colored and lettered with middle-school flair, the backpack-wearing kid stands at the vanishing point of a row of lockers and a wall of cell bars. I dare anyone not to care.