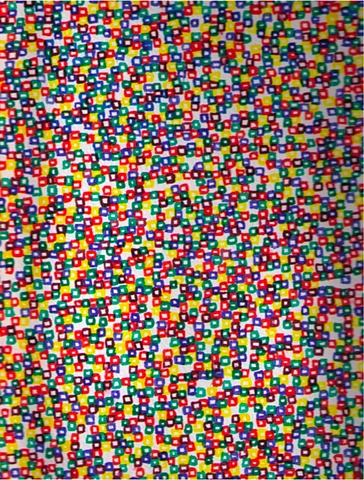 In the most telling of understatements, Stephen Martin describes his practice as “squares and dots.” Not hundreds upon thousands of squares and dots—just squares and dots. And therein lies the admirable simplicity, astonishing dedication, and undeniable obsessiveness of his work. Martin creates intense fields of small, hand-drawn shapes and others of overlapping brushmarks. Generally monochromatic, they inevitably reference the many infinite fields of our world, natural and man-made: the stars in the sky, the sand on the beach, the pixels of cyberspace. And yet they are also none of those things; they are uninflected markings repeated over and over again until they eventually, or hopefully, add up to something greater than their sum. If some of his works crowd tablet-size pieces of paper, while others fill up scrolls as long as twelve feet, still one wishes to see Martin push his practice into the realm of the truly excessive, moving from the kinds of surfaces that can be rolled up and stored out of the way to those that can’t be ignored, that envelop and consume one, that cover the walls and the ceiling—or even an entire house.