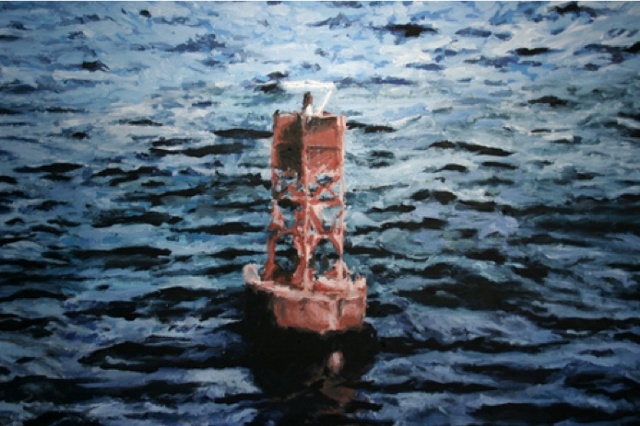 Quoting from the messy, entrenched arenas of conspiracy theory, video gaming, and science fiction, Chase Adams fashions elusive pictures and installations. Like any epic narrative, his elaborate "R’lyeh Early Warning System" has its own vocabulary, world of reference, casts of characters, and an eternal pacing. And like any such work it is also nearly impossible for the outsider to grasp, though it clearly contains fascinating, perhaps even revelatory tidbits. In this inevitable obscurantism it frustrates, and though Chase provides the novice viewer with a glossary of sorts, explaining H.P. Lovecraft’s fictional city, the mysterious underwater Bloop sound, and more, still one wishes that these explanations were less expository and more visually incorporated into the installation as a whole. Epic narratives succeed in carrying the reader via total immersion, a kind of meta-tactic that holds much promise for the ambitious artist willing not to leave text behind but to find a means of genuinely integrating it.