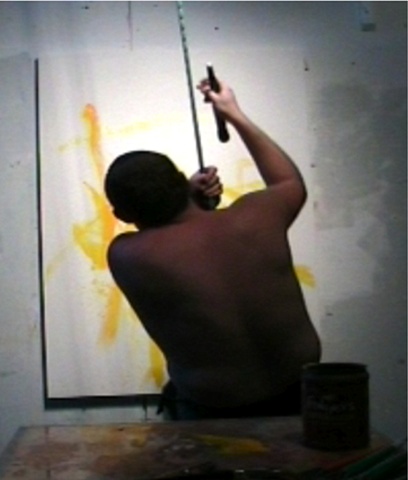 If Matthew Barney were a painter not a sculptor, preferring oil paint to Vaseline, he might make videos that look something like Eric Knowles’s. But he’s not and he doesn’t, so Knowles has more or less cornered the market in conceptual, painterly and deftly pathetic explorations of athleticism and machismo. Over and over in his videos, Knowles uses his own soft, post-athlete physique to wrestle, punch, train with, shoot at, and otherwise make sport with painting and drawing. The actions are desperate both in terms of athletic prowess and artistic effect: the ball goes long, the portrait’s retrograde; the fight’s a draw, the mark-making lame. The combination, however, has the welcome effect of a double negative or a joke made at one’s own expense, at once hilarious and disarming, it plays a risky game and wins by losing.