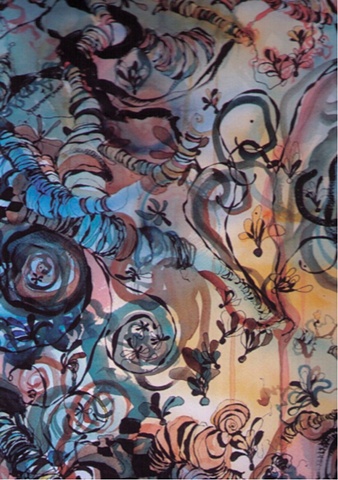 A versatile painter of seascapes and what might be called fantasy portraiture, Bobbie Crews has also turned out more formally and conceptually challenging works that alternately play with the conventions of watercolor and those of figurative representation. In "Helicopters," she marshals a chromatic array of kaleidoscopic organic forms that connote the peculiarly appealing notion of butterflies flying underwater; drippy and dizzy, they play with the watery possibilities of their medium and then some. "The Survivor Project," a series of dozens of small portraits of individuals who’ve experienced domestic violence, also reveals a deft confidence with watercolor, but more importantly asks questions about what can and can’t be communicated through the depiction of a face, what can and can’t be hidden behind that face, willingly or not. It’s a brave theme for a portraitist to tackle, not only because domestic violence remains a taboo subject but because the multiple frames through which Crews depicts each individual suggest that no picture can ever tell the entire story.