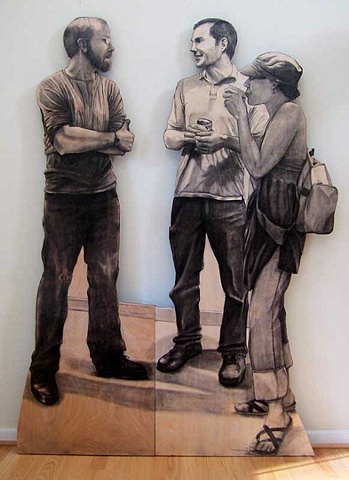 If drawing traditionally provides an intimate medium through which to sketch, record, and transmit both the loosest and most precise of figurative detail, Denise Sanabria’s practice turns that tradition on its penciled head. Life-size and larger-than-life-size, her charcoal on birch plywood drawings dwarf the viewer, existing as uncanny representations of average folks in real space. The works don’t make as much as they might of their wood grain, which suggests so much promise for unexpected skin effects, but they are otherwise true to the specificities of their original pairing of mediums. Unlike photorealist versions of the same, Sanabria’s pictures function at a double remove from reality, effecting a hand-made, grayscale virtuality and also one that, because of how the artist mounts her work, literally stands in the viewer’s space. It’s as if we stepped into a world—one that looks strangely like the early A-HA music video "Take On Me"—where people magically and suddenly become drawings of themselves, and no less animate for it.