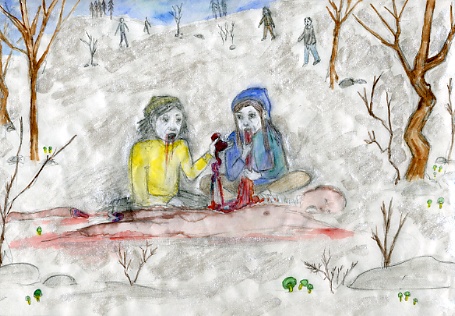 The grotesque is most effectively and affectively achieved not simply by illustrating a repulsive scenario but by marrying it with materials or a style with which it does not agree. Hence the deep ugliness of Mindy Rose Schwartz’s series of drawings from 2004 and 2005. In three small-format works on paper, a childlike drawing technique, accomplished with sparkly colored inks and pencil, sketches the grossest of narratives: in a sparse forest crawling with zombies, people gorge on bloody, raw human bodies. Thus the human meets the inhuman, and one wonders if Schwartz is questioning the assumed innocence of children, or conversely is using the cover of a childlike style to depict that which is too vile to show in adult terms. Neither choice offers much comfort, so one has little option but to take solace in the smallest of details: little green mushrooms, dotting the ground—except that they’re probably poisonous.