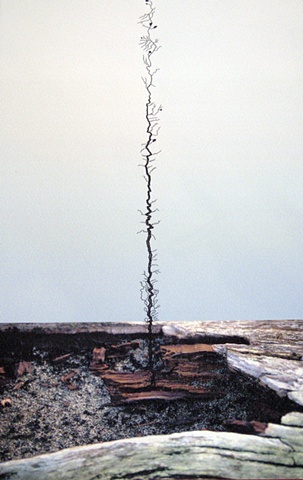 Knotted, lined, ringed, and rooted, trees have a special, long-tapped capacity to act as symbol. Oftentimes trees’ uprightness functions as a mirror of man’s fundamentally vertical nature, but in Ann Marie Schneider’s "Driftwood" digital prints from 2007, the trees lie supine, their dried, cracked surfaces spawning an inventive series of landscapes. Schneider takes close-up photographs of driftwood and turns them on their sides, thereby coaxing them into the role of land and earth, rolling hill and cavernous mountain. From these grounds spring trees, but trees grown of a similarly deft reorientation: from old maps Schneider has lifted those sinewy lines that signal long, snaking waterways. But here those tributaries become branches, their wavy sources now groping root systems that hug the undulating crust of the horizon’s surface. Thus a series of evocative connections arises between water and wood, forest and river, connections drawn through formal means—but really through the kind of uniquely human imagination that can turn a thing upside down and sideways, and thereby see it a new way. And there the pictures come full circle, using trees as a means to speak of man.