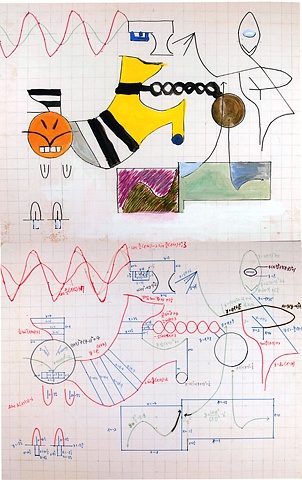 Multiple art historical tropes collapse in the oil paintings of I-Jien Kou. From one work to another, and often within the same canvas, traditions from landscape to portraiture to the nude, from the Renaissance to Symbolism to Expressionism, mix and meld and confuse one another. The result ranges from imitation to pastiche, and the viewer must work out for herself if the intention is sincere or parodic, modern or postmodern. A self-portrait carefully worked in the style of the Mona Lisa suggests the former, whereas a reworking of a pretty Rococo bust insists on the latter through its inclusion of teenagey graffiti scrawls. A series of pictures that depict typical tourist scenarios—a long line of Roman columns on a rainy day, a sunny boardwalk—each depict a long-haired woman at their center, perhaps the artist, and thereby implicate her in these histories as well. Their confusion, multicultural influence, and stylistic promiscuity is therefore hers as well.