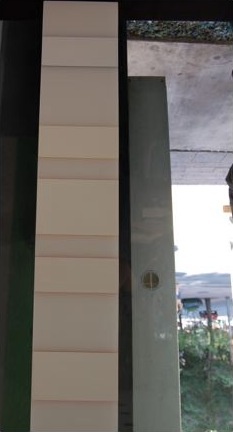 White is the most peculiar of colors, changing radically from one substance to another. White light, for instance, is made up of the entire spectrum of colors combined together, whereas white paint is made up of nothing except zinc oxide; adding any other color to the mix will spoil its purity, adding the rainbow will result in a brown mush. A starkly restrained painting by Andrew Anderson takes up this mysterious hue and makes an experiment of it in both light and paint, white and color. By carefully applying bands of acrylic paint to white acrylic glass, he achieves a study of admirable subtlety that would have made the young Robert Irwin proud. (Though perhaps less so the older Irwin, who’s moved way past the minimal concerns of gallery studies to meticulously sensitive arrangements of the environment at large.) What Anderson had made looks at first to be a simple series of white horizontal bands on a white background. But look a little harder and a colorful glow begins to emanate from behind each of these rectangles, evidence of there being something more here than just white—as is true of white light itself. Look even further, especially at the sides of the painting, and Anderson’s tactic slowly reveals itself: the white panels rest on top of hidden panels of red, yellow, and blue—an echo, perhaps, of Irwin’s 2006 installation, "Who’s Afraid of Red, Yellow, and Blue3," itself an update of Aleksandr Rodchecko’s 1921 "Pure Red Color, Pure Yellow Color, Pure Blue Color," a triptych meant to herald the (first) death of painting. And death, it’s sometimes said, is heralded by a white light at the end of the tunnel. Perhaps the death of painting has come again, here, in all its ethereal beauty.