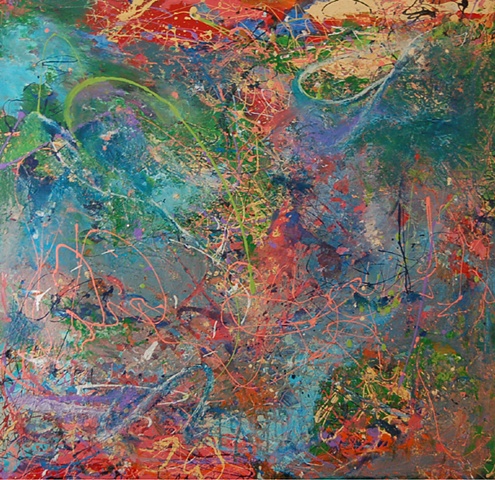 Ever wonder what might have happened if Jackson Pollock hadn’t met his fatal end in a car crash back in 1956? He’d be 97 today if he’d lived the long, healthy life his alcoholism so dramatically cut short. Such longevity seems unlikely, but less so the idea that he might have lived at least through the 1980s, when jazzy neon colors took over as part of a “contemporary” design aesthetic, and might, in our hypothetical scenario, have led to a whole new scheme of drip paintings (pretending, for a moment, that Pollock failed to evolve beyond the style he invented in the late 1940s). Anyway, Pollock died, the decades turned, 2009 arrived, and Sarah Thomas stepped in to respond to our hypothetical question. And here it is, in the form of her judiciously titled canvas “Confetti, Confection, Contrived,” a square painting whose exuberant splatters range in tone from bubble-gum pink to acid green to ocean turquoise and fire-engine red, with some silver glitter thrown in for good measure. Action painting, as the form Pollock devised was sometimes called, supposedly traces the direct movements of the artist; here the plops and splashes, riotously colored as they are, seem to indicate quite a party. One contrived for the canvas, natch, but then again, it all always was, wasn’t it?