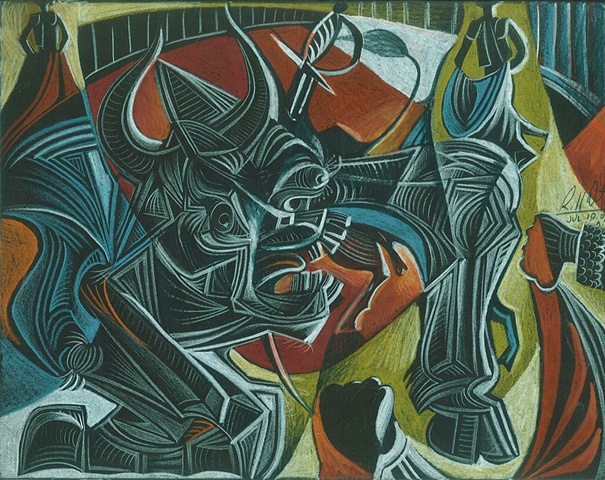 The graceful bullfighter and his fierce four-legged companion have forever been the subject of Spanish myth, with literary tellings by writers as great as Hemingway and their visual counterparts by Picasso, among others. Robbie Ortiz, too, has tackled this grand Spanish theme, and at a moment that could not be more timely, as the first man in fourteen years to be gored to the death during the running of the bulls recently met his fate in Pamplona. In approaching this storied topic, Ortiz has stuck to the style set by one of the great depicters of bulls, Picasso, choosing a mix of Cubist and Surrealist pictorial techniques to capture the many sides of this performance. Tellingly, the fighter himself rarely succumbs to the indignity of Cubist fragmentation, and his heroism is therefore allowed to remain intact, even to the point of being put, in one image, quite literally on a pedestal. The poor bull, meanwhile, is revealed in all his monstrousness via every kind of distortion, appearing here as a multi-planed monster with eyes and teeth pointing in every direction, and there as an industrial behemoth with empty sockets and copper horns. The macho legend of the bullfighter thus remains intact, and man, yet again, is heralded as the tamer of the beast.