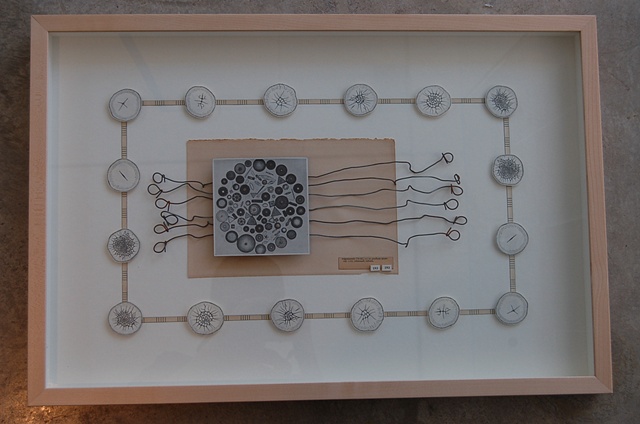 Laura Caffrey makes orderly, precious and spare assemblages out of the kind of junk that most often ends up jammed into the back of the kitchen drawer or spilling out of flea market bins. One piece from 2008 could stand for them all, given its title: “Regenerate.” Though here the word refers directly to the kind of cellular renewal depicted in the series of small found drawings that act as an interior frame, it could equally relate to the overall effect that her work has on the bits and pieces of stuff that they incorporate. Old clock parts, out of date map fragments, silly musical refrains, embossed metal fish tags, various sewing notions, lost keys, feathers, old photographs, odd playing cards—all take on new life through Caffrey’s sensitive juxtapositions of one with the other. The whole reveals a measured level of nostalgia, the kind that finds precious beauty in outmoded and useless old things, but fortunately it isn’t the kind of nostalgia that just sits on its haunches and moans about the good old days. No, Caffrey’s is an active nostalgia that insists on rummaging through piles of forgotten and rejected things, searching for those that, through her handiwork, will add up to something new.