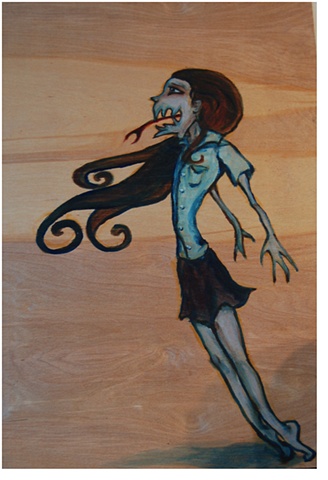 The army of girls led by Tatiana Dolfine Miller is not one you’d want to encounter in a dark alley—or anywhere, for that matter, unless your own personal fantasy life runs toward the sado-masochistic and barely legal. But fantasy here isn’t about wanting these girls, who for all their kittenish appeal are more graveyard than schoolyard, more horror show than talent show. That might be the case if the artist’s gender were male, but it isn’t. Miller is a young woman, about the same age as the girls she depicts in these elaborate, crafty shadow boxes, oil paintings, and watercolors. The gender of the artist rarely has much relevance for a work’s reception, but Miller’s work proves an exception to the rule, because what’s fascinating about the characters she’s created is how, despite their willowy attractiveness, they stand not for fragility and neediness but power and control. Granted, this is achieved through bloodied steak knives and otherworldly fangs, but at least it’s a start. Miller will eventually have to figure out how this translates into sustainable real-world strength, but for now, her girls rule.