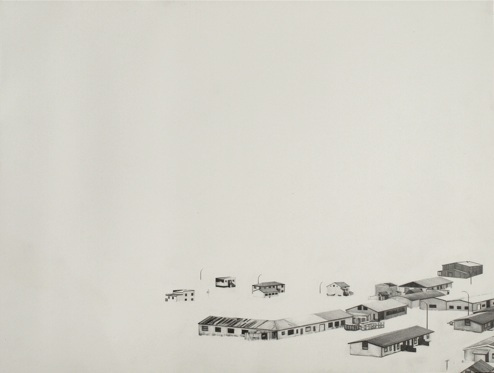 Drawings are the stuff of graphite on paper, and usually it is the graphite that tells the story. But sometimes, in the hands of an artist with a sense for the power of empty space, the paper that’s left unmarked can tell as much, even more, than that which has been sketched. Such is the case with Sara J. Frantz’s recent series of drawings, which depicts with admirable restraint the wide-open spaces of West Texas and Northern Iceland. Never mind the series’ title, “Quit the Neighborhood,” which has a jokey edge that befits neither the spaces portrayed nor the works themselves. Pay attention instead to the strangeness of meticulously rendered man-made structures somewhat pathetically adrift in the endless, majestic landscapes of Iceland’s snowfields and Texas’s deserts. At least, that’s what I see in the expanses of creamy white paper that Frantz has left blank around the warehouses and trailers that populate these places. Someone more familiar with these localities might fill in the details, the vegetation and topography that I still know nothing about. But what Frantz allows in leaving these details out is an acknowledgment of the humbling, grand nature of natural spaces—humbling because it reveals our human inability to express in words or in pictures the grandest of nature’s territory.