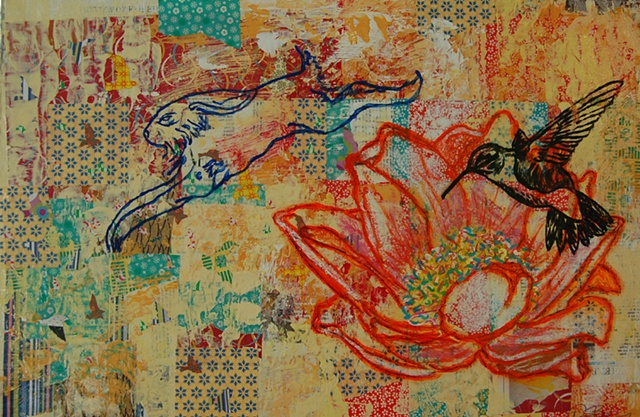 Are dreams affected by the blankets and sheets we sleep under? It’s a strange question to wonder in the face of a series of paintings, none of them depicting anything like a sleeping figure or a bed, but Daniel Birdsong’s canvases, delicately layered with square upon square of pastel-colored retro patterns, painted over in washes of yellowed paint, recall nothing so much as beloved old quilts, their pretty vintage fabrics faded through years of use. Dreams enter the picture—the pictures—in the form of a sniffing dog, a leaping hare, a hovering hummingbird, and a proud rooster, all of them figures which Birdsong has traced overtop his evocative backgrounds. These creatures don’t stand or sit or perch as animals would in a realist painting, but seem rather to materialize out of thin air, appearing and disappearing against their multi-patterned grounds. In “Recitation” and “Insomnia,” this effect is achieved in part because the animals are mere tracings, hollow creatures that exist only through their outlines; in “The Undercover,” the dog is herself made up of contrasting quilt squares. What these dreams might ultimately mean is perhaps best left up to the individual viewer to sort out—dreams, after all, fade in and out for a reason.