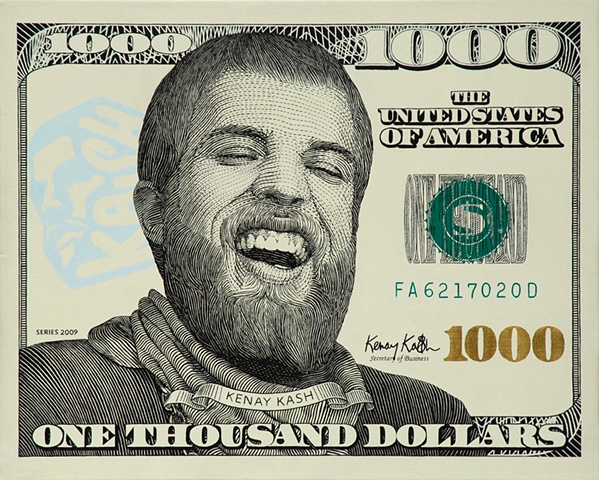 In Kenay Kash’s not-very-alternate universe, Saddam Hussein is hanged on December 30, 2006, Osama Bin Laden is commemorated as a kind of currency, and the American dream is (mis)represented as being all about sexy ladies, cocksure men and cold hard cash. This, in effect, is not so far from the way things are. Although Kash reworks the thousand dollar bill, displays a nude woman as lewdly as possible, and depicts two of the more despotic figures of recent times with the respectful precision of intaglio or its approximation, it’s hard to know just what his politics are and in what way he is trying to challenge the status quo. That he’s trying is not in doubt — who else puts his own mug on the thousand dollar bill in place of President Grover Cleveland’s, with his name tag as a watermark and his signature as Secretary of Business in place of the Secretary of the Treasury? Art can handle a whole lot of ambiguity and abstraction, in fact it handles it better than almost any other field, but art that deals in real politics demands either clarity or poetry, or some potent combination thereof. Alas Kash, or whatever his real name is, seems eager to enlist neither in his project.