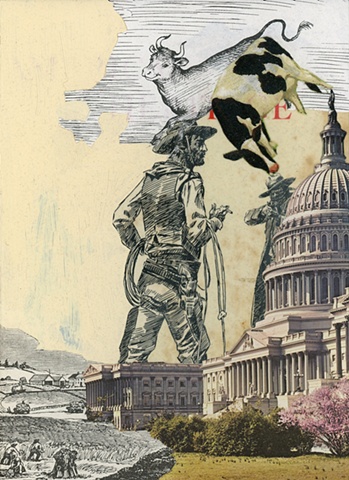 Somewhere in Columbus, Ohio, a young man named Luke Powers got turned on to Dada, and the rest, as they say, is history. History as in, hang a right at the cornfield, son, and don’t get lost on the way to the kunsthaus. If none of this makes any sense to you, dear reader, dear viewer, fear not. The collage and assemblage work of Powers packs a kicky, kitschy punch, but also a slightly mystifying one. And that’s fine, since Powers picks found objects primarily according to his own personal system of iconography, one that ranges from corn to cowboys, cows to the U.S. Capitol, polka dot bikinis to floral appliqué, with a few skeletons and organs and wise old owls thrown in for good measure. The result is a kind of thrift-store biographical self-portrait. There’s no need to care about the particular artist who’s being portrayed — whether it’s a true portrait of Powers or not — the interest, rather, lies in the work’s ability to stand as a portrait of the artist as a young man from middle America. And that it does, though the jury’s still out on just how interesting a figure that young man might in fact be.