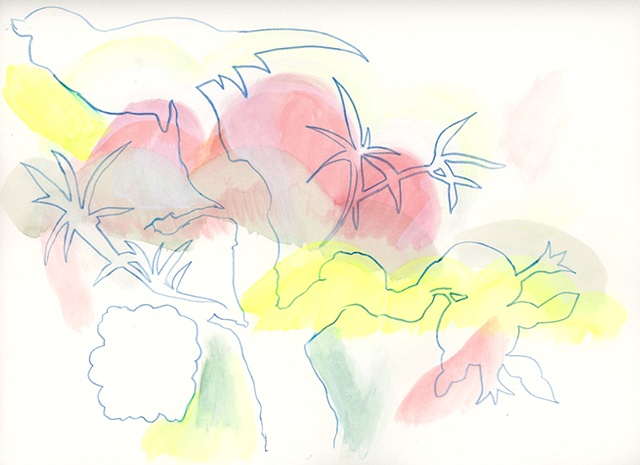 Eyeglasses, snowflakes, chopstick wrappers, couch patterns, and overpasses — hardly the stuff of visual delight and wondrous attention, snowflakes excepted. And yet, in her drawings of these everyday subjects, Bridgette Bogle manages to make many of them unexpectedly sparkly and light, playful and pleasing. How she does this has something to do with a casual isolation of subject matter and a pairing of it with simple, decorative painterliness. More than anything, however, there’s Bogle’s choice of day-glo gouache as a colorful accent, throwing hot pink and chartreuse where none occur naturally. (As if they ever occur naturally!) Thus a heart-shaped box of chocolates which should read as cheap and common doesn’t. Instead it’s a jazzy, jubilant thing bursting with strange tastes and sparkling centers. The flowery pattern of a couch comes across not as an unfortunate decorative afterthought, better left in the 1980s, but rather as a quirky play of exotic and unnatural silhouettes colored by a decidedly vanguard mother nature. In some cases Bogle’s light, quirky touch fails to defamiliarize the familiar enough to make it interesting — witness a pair of chunky, clunky spectacles and a bouquet of not-so-fresh roses. Rather than fail, though, these exceptions seem to testify to the artistic effort it takes to render the stuff of daily life as if it were in fact the stuff of some magical existence, a Midas touch not to be taken for granted.