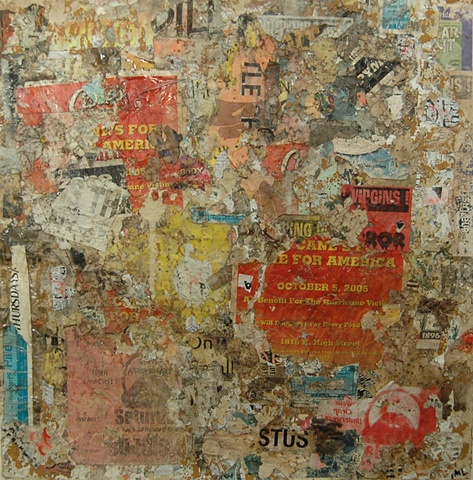 The confluence of cheap printing processes and urban consumer culture have long resulted in the papering over of cities with an ever-changing array of advertisements. In the 1950s a small group of Parisian artists, calling themselves the Affichistes (after the French word for poster, affiche), took to cutting down swaths of layered adverts and rehanging them in galleries. They presented exactly what they found on the street, thereby effecting a representation of their time and place. Matt Logsdon too creates dense collage works that resemble the messy paper visuals found on postered telephone poles and walls in the less tidy (read: not wealthy and not frequented by tourists) sections of our cities. What differentiates his practice from his predecessors is that Logsdon has chosen to return to the studio rather than make do with just the street. Instead of finding his compositions outside he creates them inside, oftentimes working with found paper but carefully and artificially crafting the dense, junky and aged thickness of compositions like Ganda and In Life You Never Know What’s Going to Happen to resemble those of the urban environment. In a world of DIY everything, choose-your-own subculture, and constant web-based digital re-presentations of the self, his is therefore as much a fitting representation of today as the Affichistes was of their simpler one.