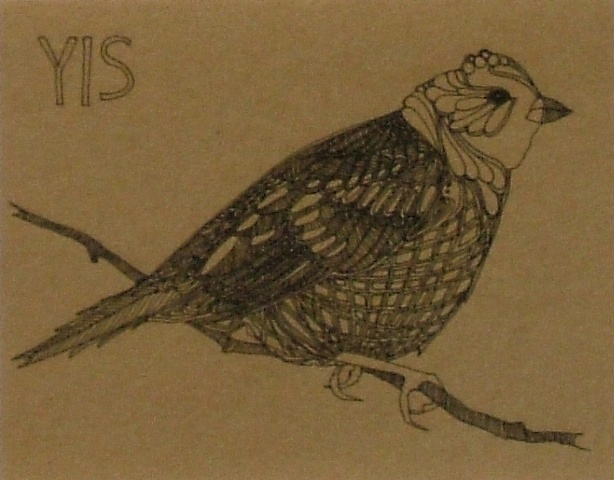 KRA! KA PO! PONG! And a MERRYMERRY, too! These, as you may or may not know, are bird sounds, made by owls, penguins, and others which I can’t quite so readily identify. These fowls and their feathered friends form the subject matter of a charming, chirpy series of hand-drawn cards by Pallavi Sen, where precise, inky pictures of woodpeckers and jays, flamingos and robins perch alongside hand-lettered renderings of their respective calls. Apart from the general loveliness of birds, the real appeal of Sen’s pictures is two-fold. First, the meticulous doodliness of her renderings, which fit a wild array of patterns onto the feathered bodies of these two-legged creatures. Swirls and grids, diamonds and waves appear where none usually grow, but somehow the exaggerated decoration fits just right, a two-dimensional means of depicting the sheen and shimmer of feathers in flight, even if the bird itself is as plebian as a pigeon. Second, the hilarity of bird calls themselves, which range from the expected CHEEP and CAW to the strange YIS and the even stranger CHICATT. Pity the poor dodo, then, who appears without a call to its name, silenced by extinction.