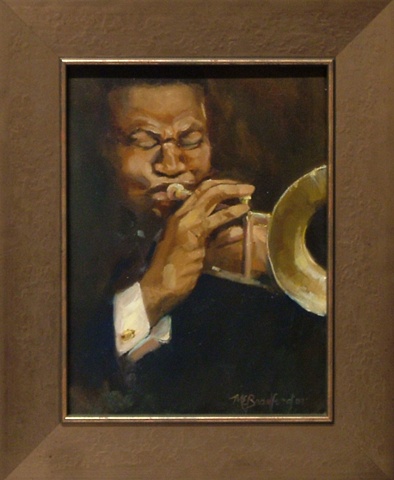 Degas captured the chic, voluptuous café singers of Impressionist Paris with awkward angles and sketchy, nighttime strokes. Matisse danced and glued vivid, quick color-paper cut-outs and called it Jazz. The history of artists representing music and musicians is long and loud, cacophonous and snazzy. Mark Bradford joins it with a modestly sized oil painting of an African-American musician playing the trumpet. Short, layered strokes are used here to good effect, especially on the trumpeter’s brow, furrowed with the effort of making music, and his eyes, shut tight from the same exertion. The man’s cheeks suck in with a breath and his lips are closed flat and wide, flush against the instrument’s mouthpiece. A shame, that — after all, isn’t the greatest vision of the trumpeter’s playing the moment when his or her cheeks inflate portentously, puffed out with the potential of all the music to come? And therein lies the disappointment of this picture, which Bradford’s titled Brass — it just isn’t as brassy as it could be. At its best, a picture of music making conveys an exciting sense of musicality, of precise sounds emanating from vocal chords and carefully turned metal, string or wood. Here the parts are in place — mouth, hands, instrument — but the music isn’t being heard.