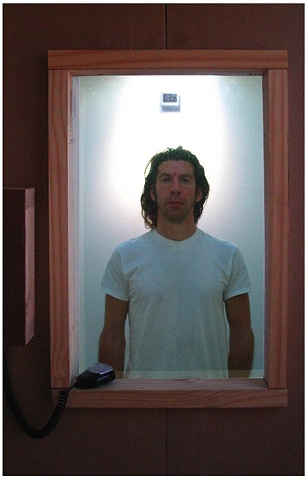 Scot Kaplan has made a peep show of sorts. A participatory performance installation titled Control Room, it boldly creates a situation of power, where one person performs tasks at the behest of an anonymous other. Recalling political grotesqueries like the torture of prisoners at Guantanamo Bay and Abu Ghraib as much as sexual grotesqueries like those that happen in your typical strip club or dungeon, the project risks an interesting kind of failure because of its reliance on the ingenuity or lack thereof of the “controller.” Given the chance to exercise power over another person, the piece asks, what would we do? In Kaplan’s video excerpt from the installation, the answer is fairly predictable: get someone to take their clothes off and hurt themselves a wee bit. A little bit of erotics (because the “subject” is attractive and fit), a little bit of humiliation, not much else. When Dan Graham and Marina Abramovic made works that relied, respectively, on surveillance and on putting power in someone else’s hands, they made sure to implicate all the participants, making everyone responsible for the outcome. Kaplan’s success, in this instance, is in taking that responsibility away — even if it results in the banality of a naked body slapping itself — because in our era it is the lack of responsibility that is the ultimate, and horribly familiar, situation of social and political failure.