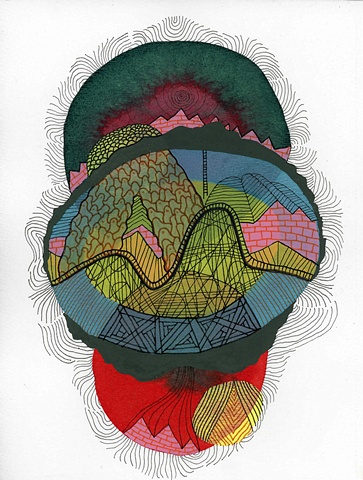 Amid dizzying alpine peaks and wildly careening bridgework, towering serpentine creatures and endlessly proliferating patterns arise the invented worlds of Aaron Troyer. Two parts Seussian, one part highland fantasy, a half part tribal mishmash and another half part fun park, these strange lands are clearly the creation of an obsessive draftsman. And thankfully so — to picture imaginary worlds compellingly and convincingly demands the hand of a committed doodler, one who perhaps ought to be committed. Not really, of course, though the art of mental patients has long been recognized for both its deftly obsessive and prolific qualities. Troyer clearly ain’t so, and the micro-macro aspect of his drawings, as they veer from far-off mountain vistas to close-up details of brickwork and skin, reveals a logic of organization that keeps his best works even-keeled despite their unwieldy strangeness. Where that balance is off things tend to go awry, the world view falling into too much organic matter and not enough structure. Nature versus culture, it seems, is still the central equation even in the newest of worlds.