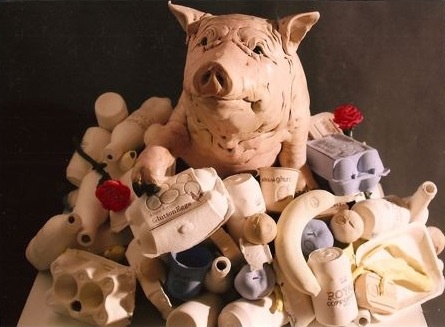 Truth rarely comes in as tidy a packet as we would like it to. Nevertheless we pursue it, and our language is filled with proverbs that purport to reveal those simple truths upon which the world is based. Ceramicist Julie Malen has made a practice of illustrating some of these sayings, applying them to specifically contemporary situations such as our gluttonous and excessive disposable food culture (“Roses Before Swine”) and the disastrous and misplaced American invasion of Iraq (“Bull in a China Shop”). Alas, despite Malen’s substantial skills with clay, which involve using it to illustrate the above sayings and situations, such that a pig appears poised atop a pile of food garbage and a bull on a table full of smashed Iraq-decal crockery, the sayings themselves are woefully inadequate to say anything very profound about these serious situations. Far more successful are some of her simpler works, such as a pair of lion door knockers, standard from the front—lion heads holding knockers in their mouths—but not from the back, which features the rest of the beasts’ bodies, tails hanging straight down. Best is a collaborative work made with Calder Kamin, in which the two artists sculpted animals found dead in Kansas City throughout the course of a two-month exhibition. Ranging from bugs to rodents to duck and fawn, the mute creatures make room for viewers to experience pathos of a kind all too rarely directed toward wild animals in the city. Road kill and pests were living creatures until they had the misfortune of inconveniencing us. We need a proverb for that.