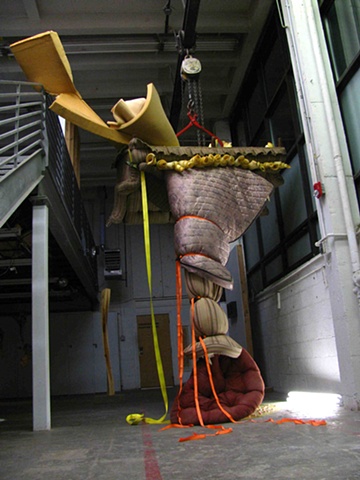 Sports stars box and golf and swim their way into some of the most exalted, heroicized positions of our time, but it certainly hasn’t led to a nation of fit, sporty individuals. On the contrary, we are a country of overstuffed couch-potatoes who mostly sit at home and watch the spectacle of hyperactive organized sports on television while our own bodies go to pot. This is the state of things that seems to be suggested by the darkly comedic sculptures Matt Jacobs has made over the past year, grossly gargantuan conglomerations of cheap candy and squishy foam, belt-tightening ratchet straps and puffy old mattresses. In “Doppelganger (Sport Design)” a poor taxidermied deer head gets the Bozo treatment when a large red rubber ball is tied to the beast’s nose with orange safety straps, thumbing it to so many sports hunters. Other pieces make equally farcical use of gummy bears and sports-themed bean bags, often tying these and other materials up in a way both awesome and threatening, as if the whole thing could come crashing down at any moment—and we, underexercized individuals that we are, might be so pathetic that we can’t move fast enough to get out from under the collapse.