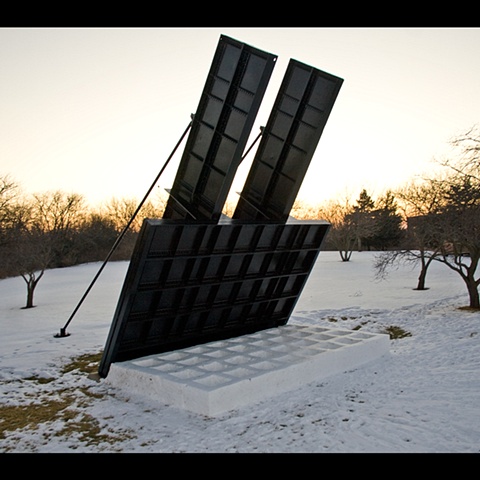 We tend to think of sculptures, especially public sculptures, in Modernist terms of permanence and solidity and intractability. Such notions have come and gone in an age of installation art and relational aesthetics, but still there is an endless and ageing population of steel, straight-edge sculptures out there, not to mention a continuing need for commissioned public works. Enter Matthew Farley, who in a diverse array of projects brings a number of older sculptures playfully but respectfully alive. He has done this most brilliantly in “SnoWaffle,” casting a grid of snow directly underneath a monumental black steel sculpture by Dale Eldred on the University of Kansas campus. Never mind the punning title, the work is both witty and accessible enough on its own to take it straight—as is much of Farley’s work. Other projects in this vein include one where, à la Fluxus and Mierle Laderman Ukeles, Farley ritually and publicly cleansed the title plaque of a Louise Nevelson sculpture. Less successful are a series of public commissions where, perhaps because of the inevitable pressure to be permanent, Farley has stretched a good one-liner about water bottles too far. The piece “Frozen Assets” is the best of these, where the water in a decorative fountain has been replaced by streams of plastic water bottles, packing an environmental message in with a smart, funny one. Perhaps what the artist needs to do is approach his own work with a sensibility closer to that with which he approaches other artists’ work. Or to make it his exclusive job to tend to those ageing Modernist behemoths that dot our public plazas and university campuses—certainly there’s enough of them to make a life’s work out of it.