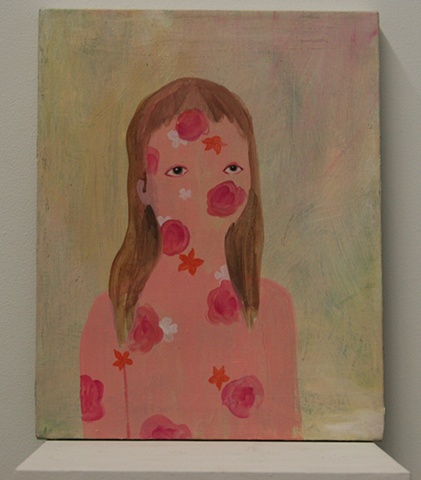 The paintings of Amy Kligman are deceptively pretty and sweet. Gentle, lithe girls are often their subject, as are girlish delights like kittens, balloons, bunnies and rainbows. But though Kligman’s pictures are often covered in flowers and other flora, everything is not here coming up roses. Look beyond the pastel colors and soft furry creatures—there lurks a subtle world of anxiety and shame and shyness. It’s in the blooms that cover the face and torso of the cutie in “Girl Disappearing,” marks that are as much sores as flowers. Note her sad, red-rimmed eyes. Notice too that she has no nose, no mouth, and as such cannot fully communicate, even if she had the will to do so. A similar muteness affects the kind waif in “Please, Thank You, and You’re Welcome,” but here the blossoms, except for one that muffles her mouth, fill the background, making a wall of flowers and her a wallflower, the kind of girl who can’t manage to say much other than the words of her own title. What’s wrong with these sweet young things? It could be anything—the weight of the world is often placed on girls’ shoulders, as an entire commercial and spectacular economy has developed that revolves around girls as objects of desire and desiring objects. How to survive in the face of such pressures often means “going underground,” as sociologists have termed it, burying oneself in the face of puberty until it’s safe to come back up above ground. If it ever really is.