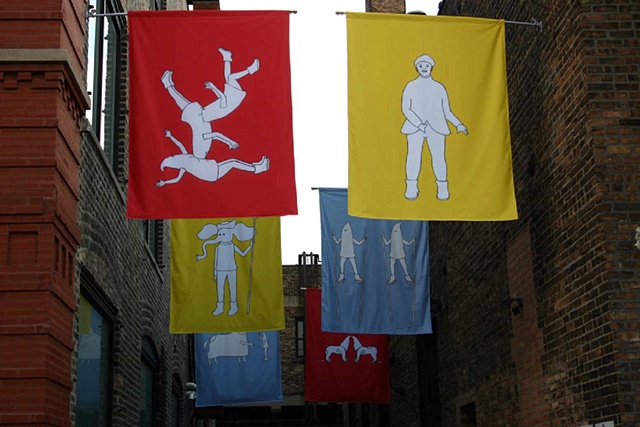 Did you know that Huckleberry “Huck” Finn was in fact a real person, one whose list of descendants includes some Katzes, Cohens and Carnezes, not to mention a middle-class family living in present-day Kansas City? Or that in England during the Roman Invasion of 55 B.C. a group of orphan girls established themselves as an army known as the “Girls Brigade,” that they were the model for Robin Hood and his band, and that their use of red, yellow and blue flags inspired Barnett Newman? These and other little-known histories form the content of Judith G. Levy’s multidisciplinary projects, which include documentary movies, paintings, text panels, family trees and more, as needed to convince the audience that they speak the truth about our past. As well they do, though, as the viewer will hopefully suspect, they are not themselves the stuff of truth. Huck Finn is as much a fictional character as the Girls Brigade is an imaginary army, but truth hides in strange places, including invented ones. Through her artful, comic presentations of fiction-as-fact, Levy manages to convey histories of racism and sexism, among other realities. If only they were the stuff of invention, and that girl army were real.