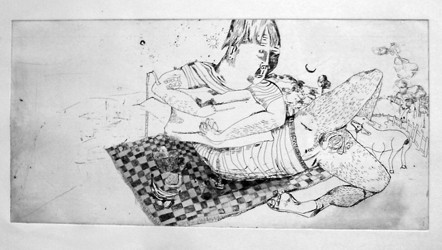 Associations between the earth and the female form are as old as Mother Nature herself, and feminist art practices, among others, have been illustrating this connection for decades. Michelle Livingston puts a unique twist on the matter in a witty intaglio of nudes lounging al fresco on a landscape that is itself composed of naked bodies. In other works she goes a few steps beyond her feminist predecessors by giving male bodies the opportunity to mother the world as well. One ballsy young fellow opens up his legs to nurse a pair of deer. Another tweaks his own hairy nipple to offer up a spray of milk. Like her earthy subject matter, Livingston’s etching style harkens back to earlier eras, recalling a tradition of political caricature enshrined by Otto Dix, among others. As with Dix, there’s an anger that seems to seethe in the scratchy ugliness of some—though not all—of Livingston’s figures. As well it should—neither Mother Nature nor Father Nature have been treated very well these last few years. To sketch a rosy picture of them would be to make no picture of them at all.