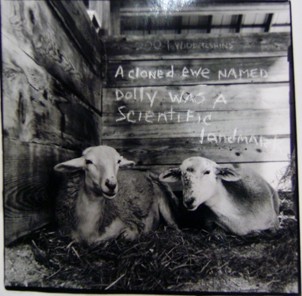 Pictures, contrary to the cliché, rarely tell a thousand words. This is especially true of documentary photographs, which aim to tell a specific story and generally need a series of images, not to mention a certain amount of accompanying text, in order to do a thorough job. Alison Shahan presents three such series, shot in black and white with an old-school Minolta camera, printed in classic silver gelatin. No digital here. Her subjects are equally traditional, ranging from farm animals to a tangled mass of old industrial buildings to portraits of the downtrodden residents of the Parkside neighborhood. Despite—or perhaps because of—the orthodoxy of her practice, her most experimental series is her best. These are the farm animals. The industrial buildings fail at a technical level, for being too blown out, too flat and too grainy. The portraits need more information about their sitters than single images shot against a brick wall allow; alone, they are too shallow, too open to stereotype. Both series would benefit from even a just a few words, to let the viewer know some of the history of the place being looked at. The farm animals have all of this solved in the most symbiotic of ways: rich and detailed, shot from close up and afar, they offer surprising portraits of beings not normally encountered so intimately. And scratched onto the very film of their images are words that tell us, without being too dogmatic, about slaughter and castration and cloning, all part of the larger picture of calves, oxen and ewes—at least when that picture is allowed to be more than just a simple photograph.