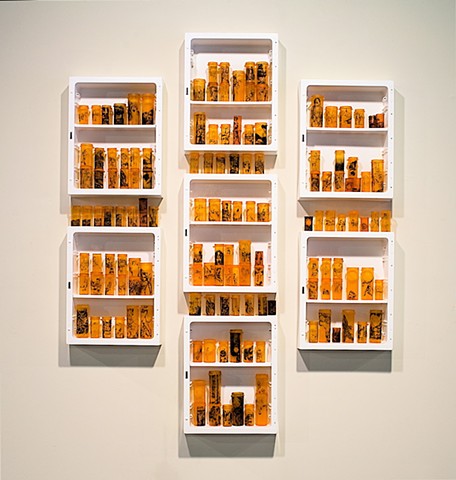 More people today take more medications than at any other time in the history of humankind. Think about that. It’s practically standard practice for overactive children to be prescribed Ritalin; everyone’s mother and best friend are taking antidepressants to feel happier; and popping Advil or Tylenol doesn’t even require a second thought. Then there’s calcium pills, multivitamins, muscle relaxants, and so much, really so very much more. We need a visual culture that represents this state of affairs—something less cynical and clinical than Damien Hirst’s colorful pharmaceutical cabinets, less opportunistic and carefree than Fred Tomaselli’s psychedelic pill collages. Kate Knowles provides just such a work in “Dispense,” an ambitious project consisting of some 200 plastic orange medicine vials which the artist used as surfaces on which to etch delicate scenes of every kind. The vials essentially serve as sketchbook pages for a dedicated illustrator, one who records everything: giraffes in the desert, a woman signing for the deaf, another fishing, a child playing with a dog, a city scene, a lithe nude, an ancient bearded man, and more. On their own these images would be lovely enough though not of any particular interest; hand-carved into the surfaces of these vials, they represent the world as seen through the manufactured illumination of a medicalized life: golden, yes, but also plastic.