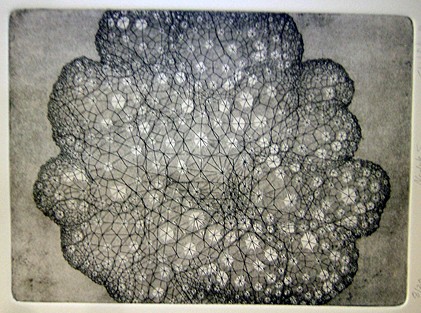 Clint Fulkerson draws and paints and prints geometric abstractions. That sounds simple enough. Yet his works are anything but. Imagine Bucky Fuller’s geodesic domes as if they were viral structures gone wild. Picture a sprawling city seen from above, at night, dotted with glowing centers and crisscrossed by the lines of endless roadways. Fulkerson’s forms cluster and spread, multiply and divide, pop and recede. They’re organic and mathematical, precise but improvised, flowing but utterly tight. In all of these contrasts, his forms prove themselves as complex and dualistic as living things—despite looking, at first, superficial glance, to be the repetitive doodles of a scientific hand. Which they may be, in part, but what, after all, isn’t worth at least a second glance? That’s one lesson of these works, though it’s not the pleasure of them. That should never be a lesson, but rather an experience to have, for oneself, thanks to the generous nature of artists like Fulkerson who put such strange, surprising work out there for the looking.