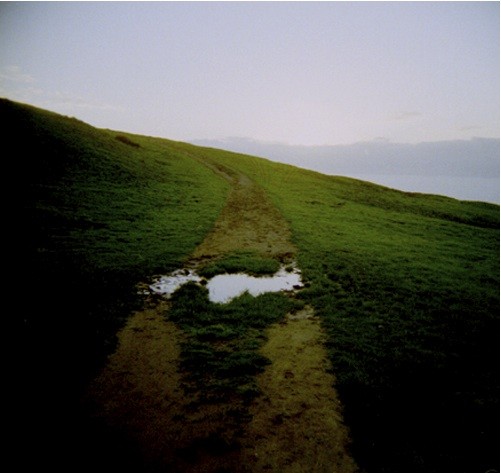 M.J. Benson is a photographer of many subjects, from driving to swimming to graffiti, but most of all he takes pictures of picturesque landscapes. The redundancy in this phrase—pictures of the picturesque—is no editing oversight: a picturesque landscape is one that is found to be pleasing not because it is inherently so but because it fits a pre-existing notion of the beautiful scene, one developed in pictures. As postmodern as this may sound, it in fact dates back to early 18th-century landscape painting. Not that Benson’s photographs themselves match the idea of the picturesque from back then—styles of the picturesque develop with the times. Benson’s aren’t particularly contemporary, but they aren’t particularly out of date either. Horizon lines, moody skies, golden light, and shimmering bodies of water don’t exactly go out of fashion. In daily life such unblemished natural vistas have become rarer and rarer, of course, but Benson lives in Maine and that gives him plenty of access to the seaside picturesque. Would that we all had a bit more direct access to it and that it weren’t disappearing quite so fast. All of which seems unlikely, and so we have Benson’s pictures instead.