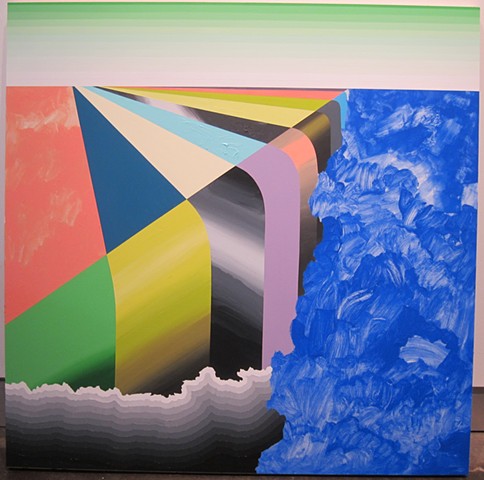 What would it be like to step inside of a painting? Neil Subel creates what he calls “meditative abstract landscapes” and indeed this description is accurate enough to prompt a desire in the viewer to mentally project herself into his picture planes. This is particularly true of a large waterfall whose cascading color bands suggest an old television signal at the base of which gray-scale currents eddy. It is less true for other more chaotic compositions, some of which feel like the repositories for elements removed from the first painting in order to maintain its peacefulness. All of these oversize works, meditative or not, possess an otherworldly digital aura not shared by Subel’s smaller landscapes. One might need to be a virtual figure to enter the former but not the latter. In one of them, a hazy purple sky floats above a set of gently striated colorful boulders. In another, a watery green and blue sea recedes around a blobby but sinuous pastel reef. Let the meditation session begin.