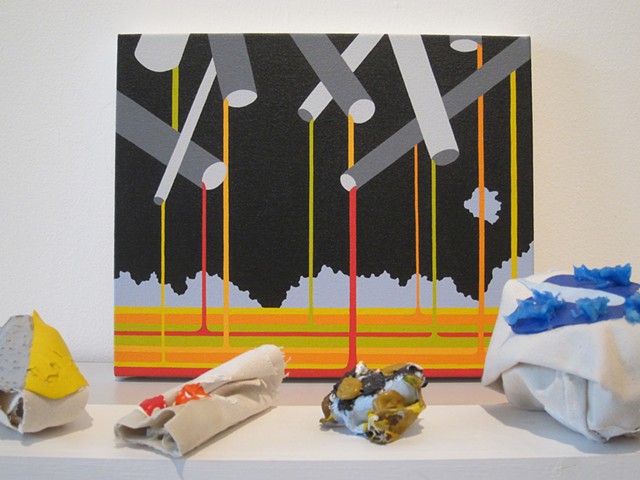 Painting can be used by an artist to achieve many different ends, from the expressive to the activist to the conceptual, and just about everywhere in between. Rarely, though, does an individual artist attempt to use the medium to hit multiple places on this spectrum. Steven Burnham is one such rare case. One of his modes produces slick, colorful panels that wittily illustrate problems of pollution, consumerism, drone warfare and more. His other mode unleashes palm-sized, wadded-up bits of canvas variously covered in goopy, undefined skeins of paint and possibly other, less recognizable substances. This two-fold practice feels schizophrenic but revelatory. Painting has been at its wit’s end for decades now, continuously threatened with death, or with already having died. Any painter paying attention would be more than forgiven for moving, as Burnham seems to be doing, between bodily expressions of frustrated making and attempts to find a way for painting to do and say something in the visual language of now.