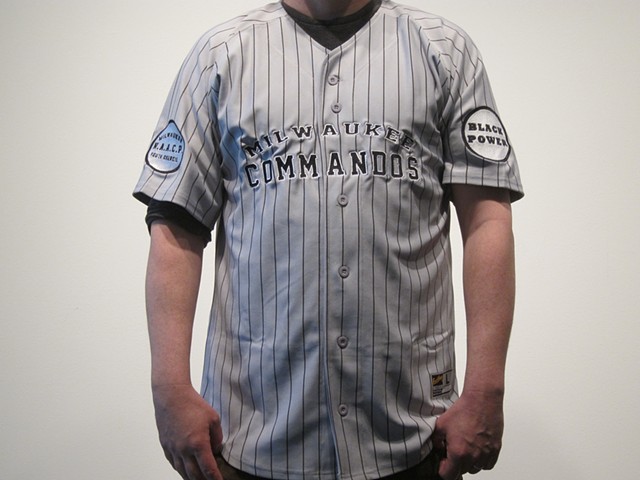 Sports teams are not known for their politically correct monikers or mascots. On the contrary, over the past few years controversies have arisen as teams have been petitioned to find more acceptable designations. These typically range from the milquetoast to the predictable, but Nicolas Lampert suggests something far more powerful. In 2012 he created a dozen gray- and blue-striped baseball jerseys for the Milwaukee Commandos, a fictional team based on a very real historical group of African-American men who in the late 60s and early 70s used non-violent tactics to protect those marching on the city’s south side to demand access to integrated housing. Despite the important successes of that and other Civil Rights era movements, Milwaukee today is the number one segregated city in the country, so when one of Lampert’s shirts is worn to a Brewers’ game at Miller Park and questions are inevitably asked of its wearer, the answers are not only historically illuminating but contemporarily, too. Lampert envisions creating similar shirts for cities around the country. Given the popularity of America’s favorite pastime, and the richness of its forgotten socio-political histories, we say: Play Ball!