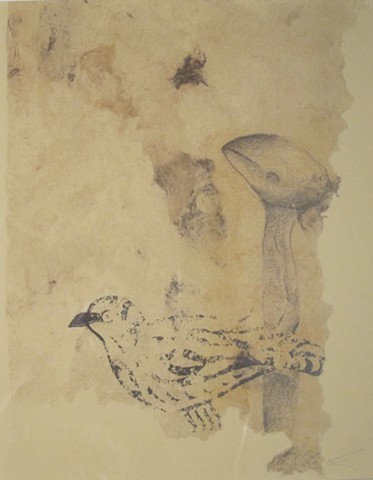 Common expectation holds that an artist’s work should fit together seamlessly, or at least not require too much suturing on the part of the viewer. But such assumptions not only limit creativity, they are historically inaccurate. One need only consider the diverse bodies of work produced by such masters as Leonardo and Picasso. Kris Reicher’s output is no exception: in recent years she has painted indulgently gauzy abstractions; sculpted a giant nest with a broken, money-lined egg as an act of economic critique; and fashioned an odd, subtle monoprint inspired by Cycladic figurines. For me, it’s the monoprint that intrigues, with its curious textures and mysterious forms. Situated somewhere in between the no-place of her abstract canvases and the obvious specificity of her nest egg sculpture, Reicher’s print knows a little bit about what it is, but not everything, and it shares this mysterious openness with the attentive, curious viewer.