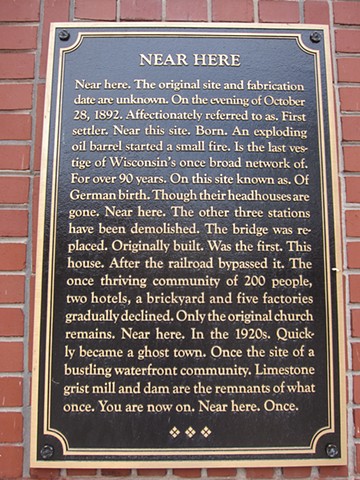 For the past two decades or so, Paul Druecke has concerned himself with resuscitating the kinds of public spaces that are easily neglected. So it seems only natural that about three years ago he began to work with that ultimate marker of recognition: the historic plaque. But Druecke has never been interested in the kind of rewriting that reconstructionist historians, activists and artists have been practicing since the 1970s. His perspective is far weirder and the results both more poetic and deconstructive, revealing not specific stories so much as the language, funding structures, application processes, and material cues of the form itself. To wit, he has installed a pair of self-serving bronze plaques, one bearing his name and the other the funders who sponsored the plaques; a blank aluminum plaque of the kind commonly found in Wisconsin, acting as stand-in for lost histories; and a bronze plate outside this very building, a collaboration with the poet Donna Stonecipher (yes, her real name) titled “Near Here,” which strings together the recognizable vocabulary of markers into something shifty yet familiar, imprecise yet evocative. It could, of course, be mounted anywhere.